Let me preface this by saying my experience was not the norm. It’s probably why it took me awhile before I realized why a normally good thing was the problem.

I felt exhausted but happy for the first two days after I gave birth. Then Little V started losing more weight than what the doctors considered normal. I was struggling with breastfeeding, but hey, most new moms do. Within 48 hours we had not one, not two, but three lactation consultants offer advice. Someone was always telling me something was wrong. The shape of my nipple. My baby’s latch. My baby had a tongue tie. But don’t worry, there were solutions to all these things so I could keep breastfeeding. I was constantly reminded that “breast is best.”

“I thought you just stick a baby on the boob,” said an exhausted Mr. Wonderful, who gallantly sat with me though every consultation and every feeding.

If only. It’s so natural for mama dogs and cows and horses; why couldn’t it be for me?

I pressed on. I was told to take up a breastfeeding vacation. Sit on the couch all day, watch TV (I’m not the TV watching type), and breastfeed. Have water and snacks within arm’s reach so I never had to move. I can tell you now my favorite moments in the Full House reunion but still can’t figure out why Little V could breastfeed for hours and still be crying in hunger. The only time she seemed to eat enough was when we reluctantly gave her a bottle at night.

A lactation consultant finally told me there was nothing wrong. Not with my breasts, Little V’s tongue, or her latch. She was just a slow, inefficient eater. After they reach 4 weeks, most babies will finish a nursing session within 30 minutes. Little V would always nurse for at least an hour (sometimes two) and still be unsatisfied.

I was told to just keep at it. It would get better. And for most mothers it probably does. But I started dreading each breastfeeding session, knowing I wouldn’t be able to leave the couch for hours. I’d hold my pee until I couldn’t take it anymore, and set Little V down in her crib so I could dash to the bathroom as she screamed for more food. It was never enough.

I spent hours reading breastfeeding forums, trying to glean the threads for tips. Everything seemed to point at perseverance, that it would be worth it in the end. “I’m so glad I never gave up,” wrote one mom after another. I cried myself to sleep, berating myself for being weak.

Eventually, I resorted to a supplemental bottle feeding after every nursing session. It was the only way she seemed to get full. But the guilt and sense of failure crept in. Was I taking the easy way out? Was I giving up?

Seven weeks after delivery, I went to my OB’s office for a routine postpartum checkup. She came in and asked how I was doing. “Fine!” I chirped, figuring that was all anyone wanted to hear. She gave me a hard look. “The results of the test you just took indicate you have postpartum depression.”

I was a bit stunned. Sure, I wasn’t my normal self, but what new mother is? It’s not like I wanted to harm myself or the baby.

So we talked, my OB and I. She asked how breastfeeding was going.

There was awful relief as the words slipped out. What had I just done? Did I really just confess that I hated feeding my child? What kind of inhuman mother would actually say that? And out loud? I was half certain the OB was going to put my statement on record and call child protective services.

“Then stop,” my OB said simply. I looked at her dubiously. “But breastfeeding is better,” I countered.

“Breastfeeding is better. But not at the cost of your well-being. You need to take care of YOU. Your child needs a healthy mom more than she does breast milk.”

“Look at me,” she said gently. “I give you permission to stop breastfeeding. I think you need to hear that from someone.” I nodded and turned away, fat tears rolling down my cheeks.

At Mr. Wonderful’s suggestion, I cut down from breastfeeding all day to once in the morning and once in the evening. I would pump and bottle feed the rest. Within two days, I felt like my old self again. It’s strange how depression works. You don’t realize you were living in a fog until the grayness lifts. You just assume that you really are inadequate and unlovable, that your friends and husband can’t stand you because heck, you can’t stand yourself. And when that becomes your thinking day by day, these lies become the truth.

Even without the struggle of breastfeeding, motherhood is still hard. I’m almost always tired, and washing bottles isn’t any fun. But now there are times of joy. I know many mothers experience bonding while breastfeeding, but for me that never happened. It wasn’t until I cut back on breastfeeding that I suddenly wanted to talk, play, and share cuddles with my baby. So THIS is what motherhood is supposed to be like.

Little V is now three months. She never became an efficient breastfeeder. She still gets hungry after feeding for an hour. But I no longer beat myself up over it. I remind myself that breastfeeding is a choice. Mr. Wonderful has made me promise that if I ever find myself starting to feel resentful or upset, I’d skip a breastfeeding session and give her a bottle instead. Still, guilt flooded over me when I caved in the first few times. What was I doing? I didn’t HAVE to give her a bottle. I could technically breastfeed. Was I being selfish? Was I choosing my quality of life over what was best for her?

And then I look at Little V, her eyes crinkled as she sticks her tongue out and gives me a huge smile. She coos, as if to say, “I just need you, Mom.” 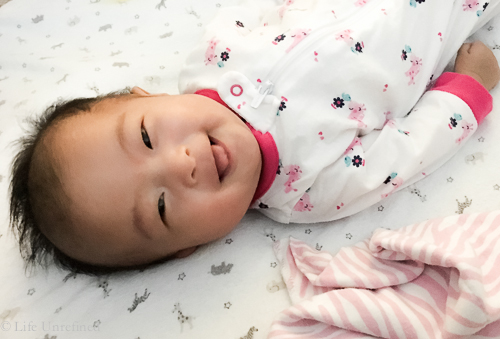